IN THE HEART OF WEST-END COMMUNITY OF THE KINGSWAY

NOT your typical EGGfest! Embark on a culinary adventure with World Class Chef Ted Reader, and behold his mind-blowing flavors of the land and sea, on a surf n turf experience guaranteed to ROCK your taste buds. Tasters will enjoy 14 live action grilling stations of delectable appetizers, entrees and desserts that are smoked, seared and served from Big Green Eggs. Join us on Saturday June 1st and enjoy unlimited sampling from 2pm to 7pm. Come Hungry! 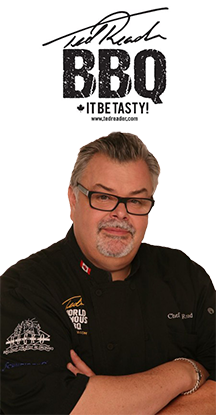 Known as the ‘Godfather of the Grill’, his charm and fearless culinary spirit has led Ted to become an award-winning chef, author, food and product innovation entertainer and a professor of Modern Culinary Applications Innovations at the Canadian Food and Wine Institute at Niagara College.

Ted’s culinary adventure began at George Brown College Chef School in Toronto, which to date has paved the way for his dynamic career. He cooks for all walks of life from swanky corporate affairs; to backyard BBQ parties and summer festivals. Ted’s passion for all things smoked and grilled is extremely contagious. You’ll often find him spreading his gospel of BBQ at live cooking demonstrations and TV and radio appearances that keep fans salivating for more!

Ted has written over twenty-one cookbooks and has won such awards as Cookbook of the Year for the 2014 Single-Subject Cookbook at The Taste of Canada Food Writing Awards for Gastro Grilling. Other books he has written include; Beerlicious: The Art of Grillin’ and Chillin’, The Complete Idiot’s Guide to Smoking, and Napoleon’s Everyday Plank Grilling just to name a few.

Ted owns over 75 grills and smokers.

Taster Tickets are on sale now. Get ready to rock your taste buds and enjoy unlimited food tasting all afternoon!

NOTE: This is an exclusive event capped at 400 tickets. Tickets will not be sold at the door.